Turkey Obesity Surgery : mostly performed, safe and effective! Comfortable start into a new life without dangerous overweight. In Turkey with all inclusive all around service to the desired weight!
+44 203 514 6311

Your BMI values:
Grade Obesity I

Obesity surgery comprises all surgical measures to combat pathological obesity. The aim of stomach reduction in Turkey is to support people with above-average overweight who are unable to successfully reduce their body weight by means of conventional measures in reducing their weight. A stomach reduction is a medical intervention against pathological overweight and the resulting secondary diseases.

Most common surgical methods for obesity surgery in Turkey

Weight loss after surgery is essentially based on the small amount of food that the patient can only consume. In order to achieve this goal, the following variants are offered in Turkey, of which the following are most frequently performed:

During this procedure, the surgeon removes part of the stomach, leaving only a small, tubular stomach. As a result of this so-called restriction, the stomach volume and thus the amount of food that can be absorbed by the stomach are reduced to around 120 ml. At the same time, the majority of the cells that control the feeling of hunger are removed along with the stomach portion. According to this, after a successful gastric sleeve surgery in Turkey, patients have a significantly lower desire for food intake than before.

This surgical method combines gastric reduction (restriction) with reduced nutrient uptake (malabsorption). After the surgeon has removed about 2/3 of the stomach, he connects the remaining stomach with the first loop of the small intestine. As a result, the liquids from the bile and pancreas that are necessary for digestion are no longer fully available in the stomach, but are diverted directly to a lower section of the intestine. The uptake of nutrients decreases, which results in quick recovery after the gastric bypass operation in Turkey.

In Turkey, both surgical methods are performed exclusively by highly qualified, experienced surgeons in modern operating theatres. The decision as to which type of intervention is appropriate depends on the severity of the excess weight, eating habits, other existing illnesses and the patient’s willingness to cooperate.

According to European standards, there are some criteria that should be fulfilled so that the reduction of the stomach size in the end also brings the success that patients and treating doctors hope for after the tube stomach or gastric bypass surgery in Turkey.

The most important are:

Skilled personnel and modern equipment at the highest level!

You are also welcome to ask all your questions via WhatsApp. Please click on the button below.

Tubular stomach formation in Turkey (conventional laparoscopic gastrectomy) is a minimally invasive surgical procedure in which a large part of the stomach is removed by video surgery. A new stomach, the so-called tube stomach, is then formed from the remaining stomach.

The volume of the tubular stomach is significantly smaller than before, so that the patient can only consume small portions of food after the stomach reduction in Turkey. The muscle pylorus, which controls the emptying of the stomach, is not removed during this surgical procedure, so that the ingested food remains in the stomach for a certain time and causes a natural feeling of satiety. Another advantage of gastrointestinal tube surgery in Turkey is that it does not interfere with normal intestinal functions. 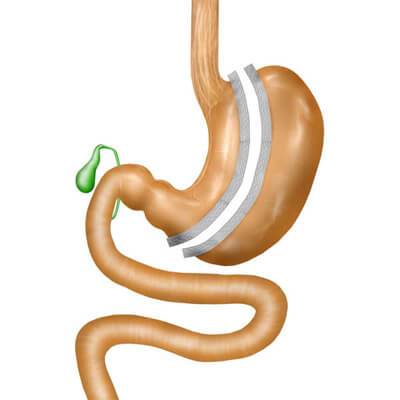 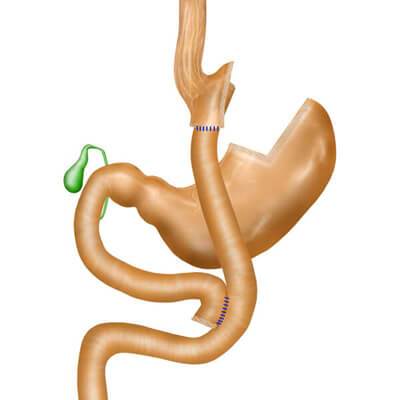 The gastric bypass surgery (laparoscopic bariatric bypass) is performed in Turkey in two steps during one session, minimally invasive, using video surgery. In the first step, the stomach is divided along a certain curve so that it is much smaller than before and can only absorb comparatively little food. In the second step, the malabsorptive component (intestinal shortening) is surgically transferred, which involves bypassing part of the small intestine and leads to reduced nutrient uptake.

This means that a gastric bypass restricts both the amount of food and the absorption of nutrients because the stomach volume is much smaller and parts of the intestine are no longer involved in digestion.

The feeling of satiety occurs as soon as the upper “stomach bag” is filled with a small portion of food. This bariatric gastric band surgery has the advantage that, depending on the success of the procedure, the silicone band can be loosened or tightened without further surgical intervention and can be removed at any time without leaving a trace. 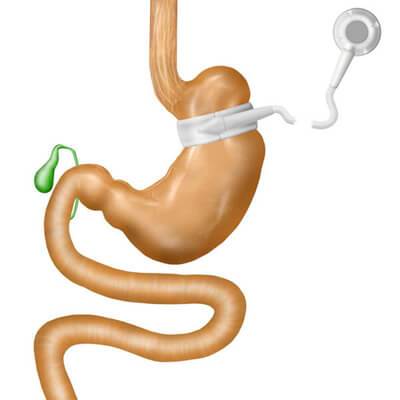 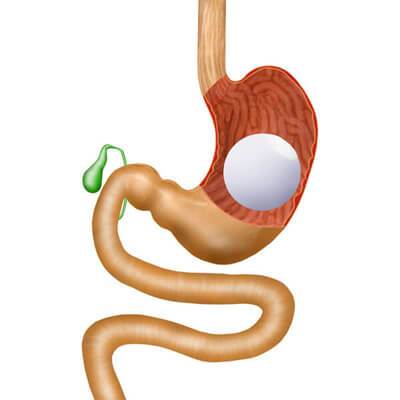 In an outpatient session, a balloon is placed directly into the patient’s stomach (endoscopically intragastric balloon) without surgery but with an endoscope. The balloon consists of a certified, well-tolerated silicone jacket filled with a sterile saline solution. The stomach balloon, which floats freely and fills the stomach to a large extent, reduces the stomach volume. As a result, the stomach can only absorb small amounts of food.

Patients with a stomach balloon report a permanent feeling of fullness. A gastric balloon is particularly suitable for people who are very overweight and do not want to or cannot undergo invasive obesity surgery. Normally, the gastric balloon is removed after sufficient weight loss. The costs for the insertion of a gastric balloon in Turkey are significantly lower than those of a bariatric operation.

Contact us for a personal consultation now. Our team is always ready to answer your questions.